I’ve been working quite a bit on my various home games this week, as Gary Con got my creative juices flowing. The Burger King Kids Club is currently enjoying our game of Labyrinth Lord. They have taken their characters through my Dwarven Brewery, The Puddin’ Works (Dingleblatz Brewery), which led them to the Underdank and a journey to find a way back out, all while encountering a MindFlayer that sent them to space. After crashing back to the planet surface in a Federation Starship, they found the Pyramid and Temple of Buttinkhamen, after a skirmish with some Klingons. They found themselves in Whisper and Venom’s Gauntswept, traveling in their Apparatus of the Crab, when they found themselves approaching an oasis. Thopas was there sunning himself by the water and with loads of indifference he hired the party to retrieve an item for him. They were then instantly teleported outside a Frost Giant lair to the North of the Gauntswept, in heavy snow and facing down a group of polar bears and their Frost Giant masters. What will they do next? Hopefully not encounter one of my favorite creatures that I never get to use, the Remorhaz! Heh.

So, after this adventure I should be able to run through Whisper and Venom, but what next? Well, I have some ideas. First off, I’m working on translating the old TV show Land of the Lost, into my next game. I originally planned to use Savage Worlds for the system, but I was hit with some inspiration at Gary Con and have decided to use another system for the game entirely. I don’t want to spoil the game for my players with a direct “This is the game I’m going to run.” because I think the game will be all the better for a little mystery up front. I’ve started working on my Forge of Ice Saleesa minis, so I should be ready to run this as we wind up Whisper and Venom in the next few weeks, which will also see a player return to the table after an absence. It will be good to have him back.

The main other item catching my eye right now is Astonishing Swordsmen and Sorcerers of Hyperborea. I picked up the box set and I’m very impressed. The quality of reading is top notch and the old-school Diamond Dice, Box Set and Poster Map, along with some great subclasses, make this game look very solid while giving me a stiff dose of tactile nostalgia. I’m getting through the Players’ Manual as I’m writing this, so I hope to know whether my group would be into it after next Wednesday’s game. If what I’ve seen and read so far is any indication, we will be rolling some AS&SH as well. 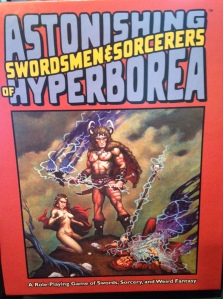 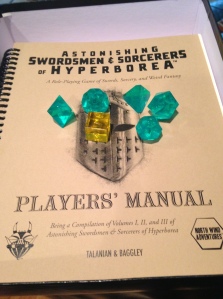 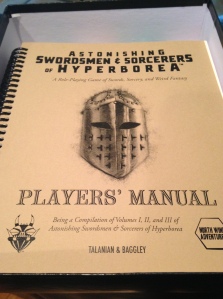